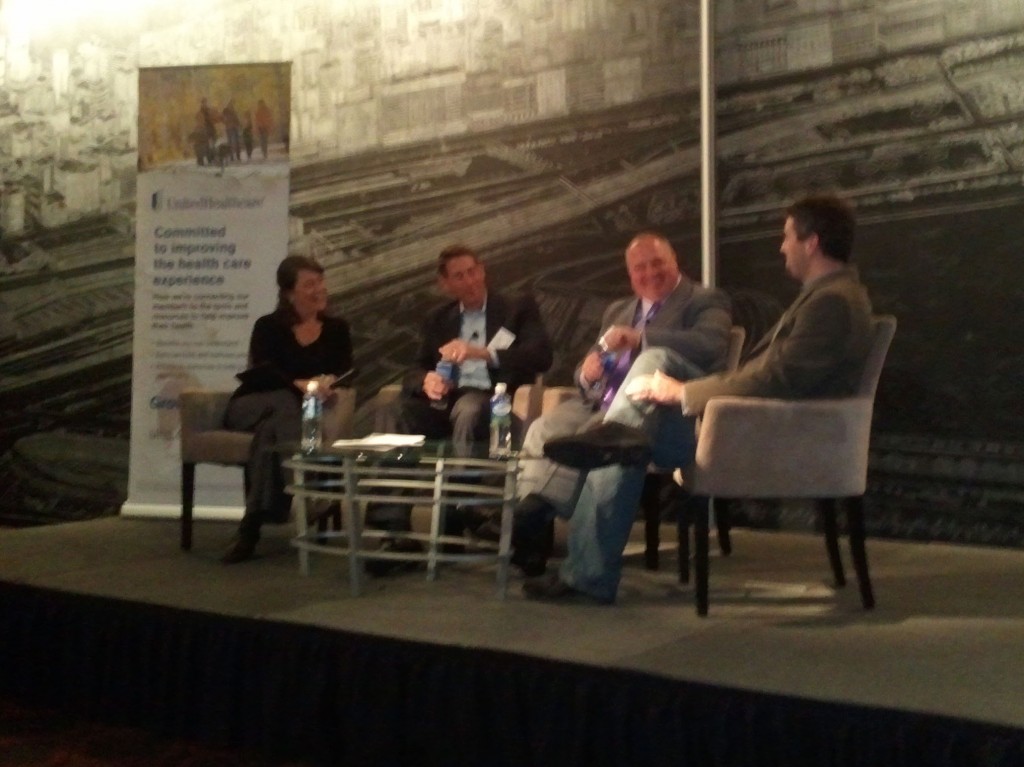 Last evening, October 12 2011, I had the honor to be a panelist at an event hosted by Inc. Magazine and UnitedHealthcare at the elegant James Hotel in downtown Chicago.  The event was so well attended, that the panel starting time was delayed because more chairs had to be brought into the room for the overflow audience.

Inc. events are always well produced and beneficial to attendees.  Karlie Krieger of Inc. seems to have a knack for matching speakers and topics.  Elizabeth Fuchs, from Inc., assisted in greeting the attendees and moving the program along. Tom Shiffle of UnitedHealthcare gave the opening remarks and then turned the stage over to moderator Kyra Cavanaugh of LifeMeetsWork.

Kyra is an incredible moderator.  Some moderators tend to expand on the panelist’s statements and take conversations down meandering paths – not Kyra.  She was very adept at keeping the conversation on topic and on pace.

Robert Pasin, Chief Wagon Officer of Radio Flyer and a friend, was a panelist.  Robert’s company was started by his grandfather 96 years ago.  He is to be commended to the way he and his brother/partner Paul successfully lead a third generation family business that is enjoying the most success since the baby boomer era of the fifties.  An even more significant mark will be set in four years: lasting 100 years with the same product.

Joseph Schumpeter, the former Minister of Finance of Austria and noted Harvard Professor, stated almost 100 years ago, that all companies are doomed to a life cycle of 100 years because they will tend to extend and defend the old ways of doing business.  Companies extend and defend because they have been successful.  They tend not to create new products, markets or processes.  He advocated “creative destruction” which is a system of destroying old “ways” and discovering “new” ways.  Among Joseph’s students were Peter Drucker and Allen Greenspan.

I would like to ask Eastman Kodak how that extend and defend approach is working for Kodak film.

Robert, and Radio Flyer defy the odds of a third generational family business and a company close to 100 years old surviving by being well educated in modern business methodology, possessing a lot of common sense, and listening to his staff.  He appears to be a Jim Collins “Level 5 “ leader the way he praises his staff for making changes to keep his products and processes relevant.

Last evening he credited organic (internal methods driven from employees up) wellness programs for creating a healthy company – including physical, emotional and financial.  He also had several funny anecdotes on how those are accomplished; just ask him about tricycle races.

Mike Evans, Co-founder and COO of GrubHub was another panelist.  Even though this was my first time meeting Mike, it was easy to tell that he is quite an impressive leader. His company is about 10 years old and has presence in 80 cites, If I remember correctly.  His company helps facilitate the process of providing food from restaurant to home/office.

Mike is articulate and passionate about growth through human capital.  He has some fabulous talent within his company, yet there is very little turnover. Recruiting his talent would be a major focus of his competitors, yet his talent stays loyal to GrubHub, Mike and his partner Matt Maloney.

One of Mike’s most poignant statements, and there were many, is that he realizes that the greatest asset in his company’s growth is his people – his stakeholders.  He admitted there was no formal program for wellness programs and family issues, but his staff was free to take necessary steps to ensure personal well being.  He explained how GrubHub values providing great health insurance coverage to their staff because it is the right thing to do.  A humorous moment was when Mike described their company soccer team and when asked if he is allowed to score he said no “I am a defender and I just hip-check the opponents”.

We were able to listen to two great leaders of two well known companies with similar stories yet divergent legacies. Listening to the panelist’s stories and then asking questions on how to apply their best practices to the attendee’s situations is how these panels function. They are also a great brand identifier for the sponsors, in this case Inc. and UnitedHealthcare.

Yet the biggest impact on the attendees, is the one on one time with panelists after the panel when individual needs are satisfied.  Each panelist last evening had many people queuing in lines waiting to speak with the panelists. Mike and Robert were patient and spent time engaged in conversation with the audience.

My experiences included connecting an attendee who wanted to pursue the idea of creating a vegan, gluten-free ice cream with a friend who is an owner of a superior private brand ice cream – Katie Dix of Campanari’s.   Another attendee wanted advice on how to develop an employee led culture.  They were connected with Tasty Catering’s staff who were in attendance, and a date was set to meet for a discussion in how an employee led culture can be formed in the attendee’s company.

An entrepreneurial undergrad student at the University of Chicago asked if I would speak to her class about some of the points in my discussion.  Another interesting discussion was with a person who is in the throes of a start-up company.  She is making the leap!   She asked about important factors in constructing a business plan.  She was invited to join me today at noon when I address Dr. Harold Welsch’s entrepreneur class at DePaul University.  The topic is how to develop a business plan based on an entrepreneur’s approach versus and academic approach.

The best panel discussions are those that satisfy the needs of the audience.  Last night’s event was an example of how a panel should be produced. Thank you Inc. and UnitedHealthcare – as well as Kyra, Mike and Robert for a very special evening!