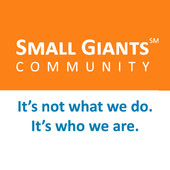 The Small Giants Community (SGC) is a unique group of entrepreneurs from various companies who share the values as advocated in Bo Burlingham’s book, Small Giants. Last year’s Small Giants International Summit was held in Konstanz, Germany, and SGC member and event host Sue Barry provided an incredible background for the successful business conference. This year’s SGC Summit met in the financial district of San Francisco. Fellow SGC members from Romania, France, Germany, Brazil, and Canada—and half of Ann Arbor Michigan’s business community—were in attendance, and the renewal of old friendships raised the temperature of the lobby.

The members of the SGC share the same values and ethics and understand the importance of human capital in their organizations. They realize that improving the position of all stakeholders will result in the improved value of the shareholders and that sharing this common ground allows for a faster bonding. Personally, I am a huge proponent of the Small Giants Community, as well as the culmination of what all members represent at their once a year International Summit. The Summit allows all of these great business people to interact with event attendees in ways others simply don’t. Additionally, the speakers and guests open up to attendees and fellow speakers for extended periods of time with an honesty that is unrivaled.

Joining us this year were Katie Sowa and Mike Luchies from the Collegiate Entrepreneurs Organization. Also in attendance were Amber Johnson, Jim Ludema (Ph.D.), and Kevin Lynch (Ph.D.), members of the Center for Value Driven Leadership from Benedictine University. I hope that a pathway from college entrepreneurship classes to job producing entrepreneurs will grow through entanglement such as this.

During the conference, we Tweeted some of the key elements, but these are the ones that have made lasting impression and points that I would like to reiterate. I hope that you will view these points as central to successful business as I do.

I have been to many business conferences where speakers get on stage, make their presentation, take questions and then disappear. Attendees of this conference had the pleasure of sitting at tables to have breakfast, lunch and dinner with the speakers. Jack Stack, for example, sat at a table for a day and a half talking and participating in round tables with whomever was there. The impact of this type of behavior on the attendees is incredible.

I’d like to offer my thanks to Paul Spiegelman, founder of the SGC, owner of Beryl and the Beryl Institute, and author of Why Is Everyone Smiling?—a book about a great company culture in action—for his leadership and for being the driving force behind these Summits. Also, thanks to Raul Candeloro, the Executive Director of the SGC, for his work in organizing and facilitating the Summit. Raul is one of Brazil’s most famous entrepreneurs, a distinguished author and business owner. Thanks to the Small Giants Community staff of Aubri Levins, Glenn Burr and Jason Armour for producing such a memorable event.

In closing, I have a profound appreciation for Bo Burlingham for writing the book that drew us together and for spending hours at these events talking with business owners and connecting people. He is the Editor at Large of Inc. Magazine, and I highly recommend his work.

Finally, if you’d like more information on the Small Giants International Summit, Marissa Smith of The Whole Brain Group in Ann Arbor, Michigan, wrote a great post on her website about the conference. Please visit it to learn more.